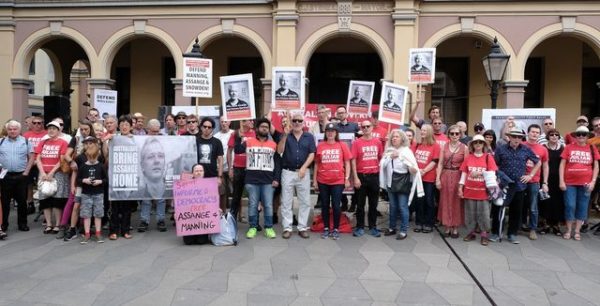 Workers and retirees, as well as youth and students attending the Socialist Equality Party’s rally in the western-Sydney suburb of Parramatta on Saturday responded powerfully to speakers’ calls for them to deepen their involvement in the fight to defend WikiLeaks founder Julian Assange and US whistleblower Chelsea Manning.

Some of those attending SEP Parramatta rally

The Parramatta rally, which was attended by up to 120 people—and has now been watched by over 4,000 via online streaming—was followed the next day by an SEP rally outside the State Library of Victoria and a march through the city of Melbourne. A demonstration was also held on Sunday in Wellington, the New Zealand capital, organised by the Socialist Equality Group.

Reports on the Melbourne and Wellington events will be published on WSWS in the next days.

In Parramatta, the predominantly working-class audience—some of whom were attending their first rally in defence of Assange and others who travelled hundreds of kilometres—listened intently as speakers explained the global, US-led conspiracy and persecution of the WikiLeaks founder and the US whistleblower. Addressing the crowd from the Town Hall steps, speakers were frequently interrupted by applause during the live-streamed event. The warm and serious response is a reflection of the growing international support for Assange and Manning and a deeper political understanding and determination to fight by important layers of students, workers and youth.

The rally heard greetings from the recently-established Darwin Northern Territory Assange Action Group, which had protested on Friday outside the Northern Territory parliament. The group saluted the WikiLeaks founder and declared: “Thank you Mr Assange for speaking for us the people. Now it is our turn to speak on your behalf! With protests being held worldwide we stand together united for the truth, for justice and for freedom.”

International Youth and Students for Social Equality (IYSSE) member John Davis told the rally that Assange and Manning were the victims of a vicious, decade-long political witch-hunt. He reviewed the brutal and ongoing imprisonment of Manning and her fearless refusal to capitulate to Washington’s legal blackmail.

“The actions of Assange and Manning,” Davis said, “whilst being deemed criminal by the American state apparatus and its allies, are correctly regarded by millions around the world as heroic acts.”

Margaret “Mags” Richardson, a registered nurse and founding member of the Julian Assange Supporters Alice Springs Action Group, explained the impact on her of Assange’s violent arrest and expulsion from the Ecuadorian Embassy in London. Outraged over his persecution, Richardson found the SEP on the internet, flew from Alice Springs to Sydney to attend its June 2019 rally, then, with SEP members, organised a public meeting in Alice Springs in November. Out of that meeting, she then established an “action group” for Assange.

She told the rally: “We are building an awareness [in Alice Springs], talking to people about Assange’s situation and the real reasons behind his persecution. Even if the numbers are small to begin with, it doesn’t matter, because you are building an awareness amongst ordinary people, which is the only way forward, and you do this in the knowledge that there is a definite groundswell of support internationally…

“That we have established an Assange action group in Alice Springs, just a few kilometres from the US Pine Gap spy base, is a powerful message to the US and its corrupt and illegal attempts to extradite Assange, and the Australian government which is allowing this to happen.”

Richardson explained that the group had petitioned the Alice Springs City Council to pass a resolution opposing the US extradition of Assange. Presented to last month’s meeting one councillor walked out and another opposed any debate on the issue claiming that it was in “conflict with the community” and “the very large American contingent” in Alice Springs.

“In other words, don’t do anything to upset the US government. It was a political microcosm of what is going on in the Australian parliament… Our initiative was very revealing and points to the attitude of Australian governments—Liberal and Labor alike—towards Assange and why they have thrown him to the Washington wolves,” she said.

Richardson noted the inseparable connection between the defence of Assange and every other basic right: “I’ve been an environmental campaigner for many years of my life, but Assange’s situation underpins everything. We won’t have a voice on any environmental issue, or any other issue, if we do not have honest information and freedom of speech…

“You cannot rely on the parliamentary pollies because they support the US-Australia military alliance and Washington’s great war machine. The release of Julian Assange and Chelsea Manning is up to us, the people, to form grassroots organisations and develop a mass movement from below.”

Lissa Johnson, a clinical psychologist and a leading member of Doctors4Assange, told the rally that she began writing about the psychology of Assange’s persecution after attending an SEP rally in Sydney in June 2018.

In a chilling address, she reviewed the media and psychological war conducted against the WikiLeaks founder and how this campaign—including his extended isolation in the Ecuadorian embassy and his torturous incarceration in Belmarsh prison—were destroying his physical and mental health. Assange is the victim, she said of, state-sponsored medical abuse “perpetrated for political reasons” and to “facilitate the political extradition of a journalist.”

Johnson explained the work being conducted by Doctors4Assange, which has sent letters to the UK Home Secretary and Secretary of State calling for Assange’s transfer to an appropriate hospital, along with a letter to Australia’s prime minister, foreign affairs minister, and Labor Party opposition leader Anthony Albanese.

Johnson noted that all the letters had been ignored and drew attention to the latest letter authored by Doctors4Assange which was published in the Lancet medical journal.

“It is this last abuse that is the most dangerous, because true investigative journalism, the kind that exposes the crimes of the powerful, like Julian Assange’s journalism, is what protects us from all the other abuses of power.

When true investigative journalism is stamped out, which it will be if Julian Assange is extradited, thereby criminalising journalism, we will be at the mercy of unchecked power… And if the psychology profession knows anything about power, it’s that unchecked power and unchecked abuse, will escalate. That is the kind of world we’re on the brink of entering now.

“The powerful don’t persecute and silence journalists unless they want to get away with murder… If Julian Assange is extradited we will have set tyranny free.”

The final speaker was SEP National Committee member James Cogan, who has played a leading role in the Socialist Equality Party’s defence of the WikiLeaks publisher and the US whistleblower. Assange and Manning, Cogan said, were class-war prisoners and the victims of the generalised and escalating state assault on the basic democratic and social rights of the working class. He warned that the growing international support from workers and youth had forced some politicians and various previously silent organisations to speak out.

He stressed that there should be no illusions about Australian Prime Minister Morrison, or the opposition Labor Party, the British government or the Trump administration. Moral appeals to these forces will not produce some “overnight transformation.”

The speaker pointed to last week’s court endorsement of the Australian Federal Police raids last June on the Australian Broadcasting Corporation, when it ruled that national security considerations “outweighs public interest in the free flow of information.”

This meant, Cogan said, “Any media that publishes whistleblower evidence of Australian war crimes or intelligence operations, or just how close US-Australian military collaboration has become, will become the target of police investigations, raids and charges.”

He also noted that the Morrison government, with the full bipartisan support of Labor and its leader, Anthony Albanese, has announced that another $1.1 billion will be spent on upgrading the Air Force base at Tindal in the Northern Territory.

These developments, the speaker continued, were in preparation for war. “The hostility of successive Labor and Coalition governments toward Assange stems directly from their mutual commitment to the US-Australia military alliance and their alignment with the US preparations for a catastrophic military confrontation with China. The dominant sections of Australian finance and big business are tied to Wall Street by a thousand threads.”

Cogan concluded by assuring all those in attendance that the SEP would intensify the fight for the release of Assange and Manning and appealed for workers and youth across Australia to follow the example set by the Alice Springs action group and form similar committees.

The video of the rally can be viewed here:

Many people remained behind after the rally to discuss with the speakers the issues raised, give interviews or leave their contact details, purchase literature and “Free Assange” t-shirts and donate.

Contribute to the fight for socialism in 2020

2019 has been a year of mass social upheaval. We need you to help the WSWS and ICFI make 2020 the year of international socialist revival. We must expand our work and our influence in the international working class. If you agree, donate today. Thank you.

Please enable JavaScript to view the comments powered by Disqus.